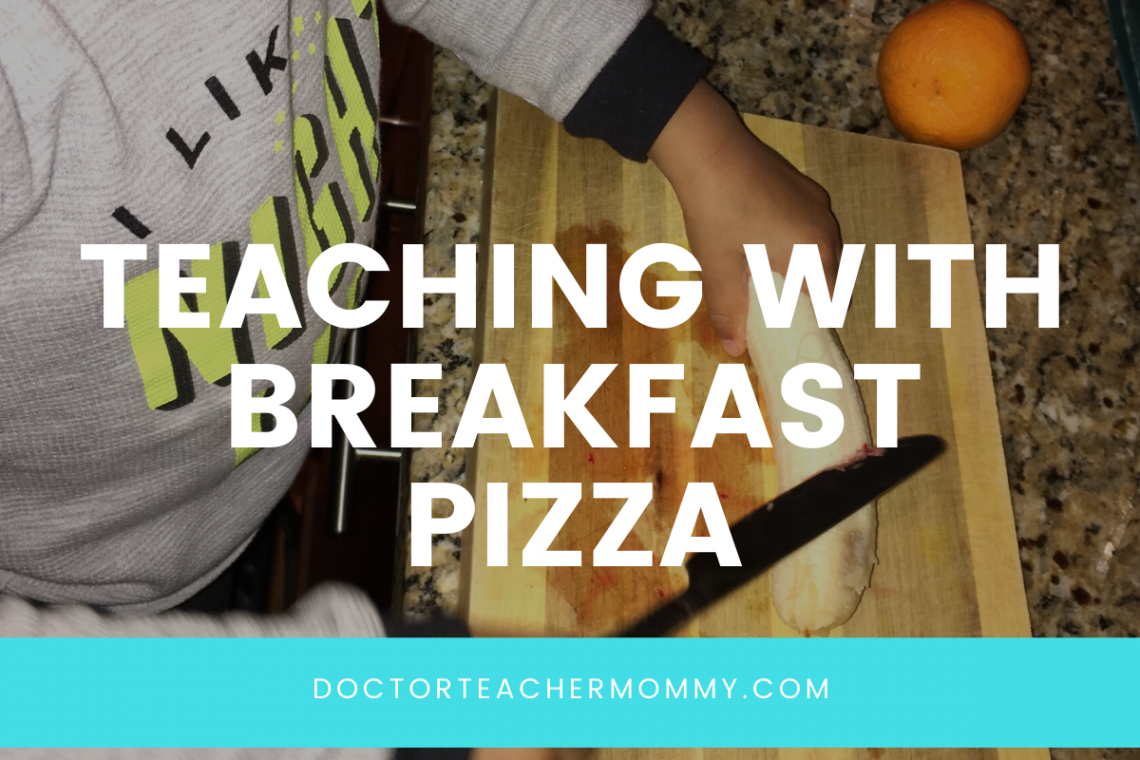 Ok, if you’ve ready some previous posts I’m sure by now you’re probably wondering, “Does this family eat anything that isn’t pizza?”

Yes, actually the only thing this kid typically eats for breakfast is porridge. (That’s right, not oatmeal, I said porridge like Goldilocks and the bears…) But today we were out of his typical favorite so when I asked what he wanted to eat, I had to honor his request for pizza with Breakfast Pizza!

This was another super fun way to connect with him through a cooking activity we both love to share! He has become a pro at spreading sauce, shaking spices, and sprinkling cheese on our dinner meal so we transferred those skills to breakfast pizza!

This time we used Hardough bread as our base. Never heard of it? Head to the ethnic aisle to check our their Caribbean selection. This traditional Jamaican bread is much denser than our standard American sandwich bread and typically sweeter which made for a fantastic breakfast pizza base. It was also a sweet way to combine both of his Jamaica and Italian heritages into one meal!

When I suggested yogurt as our sauce alternative, he immediately asked for “crunchy stuff”. (He is totally capable of saying “granola” but it’s much cuter to hear a request for “crunchy stuff”!) Then we brainstormed other foods he usually eats in the morning. Bananas, oranges, berries (sadly we were out), pears, and “quack-amole” (again, he is totally capable of saying “guacamole” but that is stinkin’ cute!!!)

So we got to work! One thing I love about cooking are all of the hidden opportunities to teach. While he was putting the yogurt on the bread, we talked about moving the yogurt all over the bread’s surface which is called, spreading. This is a new vocabulary word that I know he’ll start to use after hearing it being used in context.

We talked about transitional words such as, “First, Second, Next, Then, Finally, etc.” This is a little more complex to teach out of context so when doing an activity that has steps or a particular order to follow, it is much easier to teach young children how to use these words in conversation. For instance,

First, we spread the yogurt onto the bread.

Second, you chose to add the pears.

Then you want to add the banana.

Last we need to top it off with “crunchy stuff”.

Now we are finished! Let’s eat!

See how easy it is to incorporate more complex vocabulary naturally into the activity? By using words he already knows such as, “Banana, bread, pear, cut” in more complex sentences, his brain is starting to understand how those words make sense. If I decided to teach to word “spread” while waiting in line at Target, this probably wouldn’t make any sense since he wouldn’t have concrete examples in front of him. Explaining these concepts with a hands-on activity is the best way to teach young children!

There’s also a ton of stuff that was secretly being taught. For one, he is learning healthy eating choices as we reinforce what are options for breakfast. I will admit that on Feb. 15th he asked for chocolate for breakfast. He enjoyed a Hershey kiss the night before as a special treat and immediately asked for it as soon as opened his eyes the next day. We talked about that being a special treat and not something we eat all of the time. Insert 2-year-old whining in disagreement, but when the chocolate did not appear, he got over it. These healthy eating messages are sometimes more explicit as we explain why chocolate isn’t a breakfast option, but more often it’s subliminal in our everyday discussions about foods.

Another skill he has to learn while cooking is self-regulation. In order to get the yogurt onto the bread, he needs to control where the spoon is moving. Widely flailing the spoon around may seem like more fun (especially when he sees my reaction), but ultimately it won’t get the bread covered.

As much fun as he is having adding those toppings to the pizza, he has to learn to stand still on the stool in order to be safe. At the beginning of our cooking adventures, this was something I constantly had to remind him. Now he knows dancing or jumping is not an option when standing on a stool. Once he’s done cooking, he can go bananas on the ground!

So whether you’re looking for a way to get your little one to eat more by taking part in meal prep or you just need a fun activity to do together, know that you are teaching your little one so much more than you know!

Some skills may be more intentional like the vocabulary, others are more embedded in the healthy choices.

But the biggest take away they will have no matter how the food turns out, are the positive, happy memories they are making with you!  Enjoy!