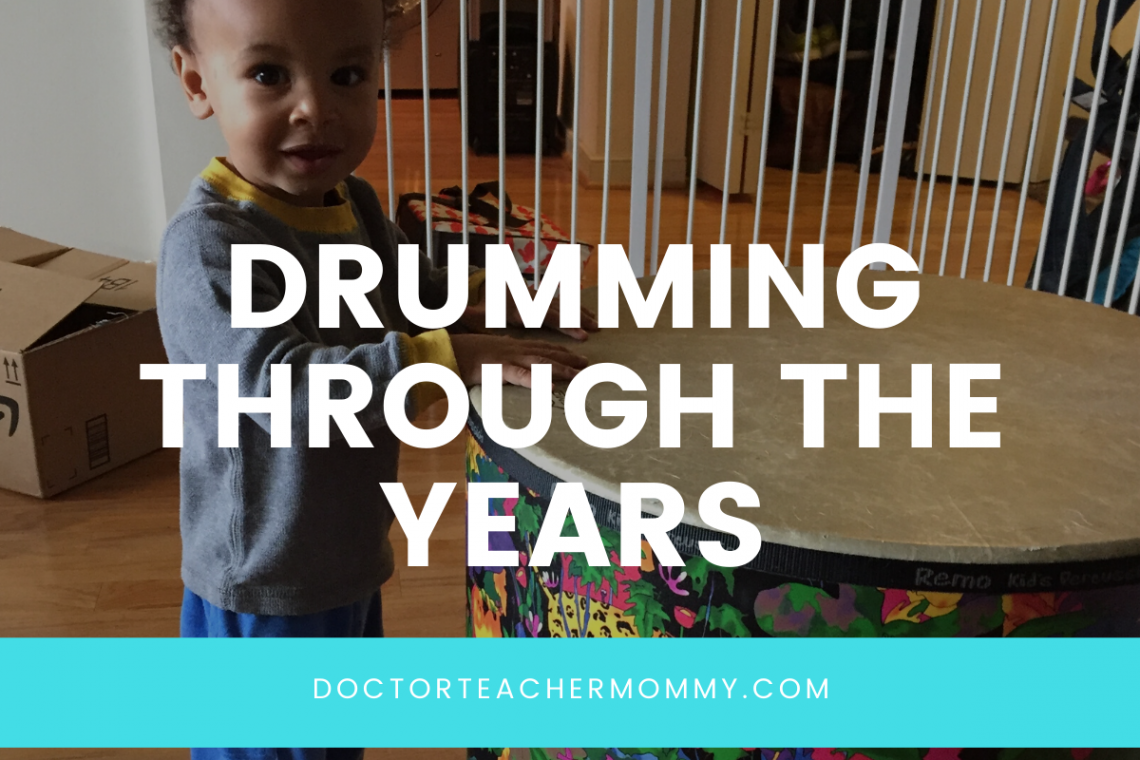 I’ve been lucky to see hundreds of kids grow and change in the past few years in Zumbini®, but my favorite person to observe long-term growth with my own little one. He has been drumming since the days he attended Zumbini® prenatally ( kicking in the belly!)

Some parents have mentioned not wanting to bring their young baby to a music class until they are, “Old enough to participate.” Here’s the tricky thing with that statement; they participate from the moment they are born. For young babies, drumming will not look like hands patting away. It will look like staring, feeling, hearing.

Their brains are working so hard to process all of this new information while creating new neural pathways. These same pathways will be used later on as they develop more physical coordination, allowing their brains to more quickly associate patterns and copy drumming patterns. It is amazing how much they participate internally during these early stages of life, and how much these early experiences impact their future development. Even if you can’t see it, exposing them to drumming early on will have a lasting effect!

When my little guy first started coming less than four months old, he was super focused on staring, listening, and feeling the beat of the drum. He would keep his hands on the drum head while the older kids patted away, feeling the vibrations they were creating. Just listening, feeling, hearing, and watching.

As he grew, little by little he started to pat along with us. Random arm movements at first, then slowly becoming more coordinated movements. Sometimes on the beat, sometimes drumming to his own rhythm!

And then it was like an explosion of drumming with musicality! All of a sudden he could pat with two hands keeping a steady beat. He started alternating hands while drumming. And most recently, he will pat in time while singing basic songs!

This progression is exactly what we want to see in Zumbini® over lots and lots of time. Each child develops at their own pace at their own time, however, with more repetition and exposure to new experiences, children gain skills more quickly than peers who have not have the same experiences.

Drumming as a big kid

I blinked and my little one is taller than five drums stacked up! Watching him grow and change has been one of the greatest lessons I’ve ever learned.

Now, as a confident big kid, he uses drumming everywhere. He drums along with his favorite songs he commanded Alexa to play. He creates his own beats in a living room jam session.

Drumming in Zumbini® means being able to copy a much more complicated pattern than just a few months ago. From all of those early years of experience, his brain can easily identify various rhythms and patterns while adding on more difficulty. This added difficulty could also be in the speed of the drumming or the volume (trust me, drumming softly requires SO much self-control).

One new way he has begun to use the drum is to tap out the rhythm of words. He can break up the syllables in a single word (“cat”- 1 beat, “chocolate milk”- 4 beats). Sometimes he taps out the cadence of full sentences. Using a drum in this way is now starting impact his literacy development. Seeing this new progression makes this teacher-mommy super excited!

So whether it’s drumming at Zumbini® class or banging on pots in the kitchen, break out the aspirin for yourself and let your little one drum away!